As we know, Energy cannot be destroyed but only transformed.

The Orb is a basic energy pattern or shape of the spirit world. Orbs are three dimensional and have a mass and density and can often cast shadows.

Some skeptics believe the only true ghost or spirit energy photos are those that appear as seen through the naked eye – “a full apparition”. Unfortunately a full apparition is rarely seen or photographed because they require a great deal of energy to be formed, unlike the Orb which requires far less energy.

When taking photos of orbs, one needs to follow a few basic rules:
• Do not photograph in the rain, snow or fog
• Do not expect that everything in your picture is a true spirit orb
• Take into account even the cleanest home will have dust. (i.e. Dust can be stirred up when someone is shuffling their feet whilst walking on a carpet. Most digital cameras will pick this up and it will look like a spirit orb).

Orbs may vary in size, colour and brightness. This has to do with the amount of energy that the spirit is able to bring through, as well as the distance between you and the spirit.

Orbs float in the air and change direction at the speed of light. They also react to the people around them and can appear indoors and outdoors.

The best advice for someone who has noticed an orb in a photograph they have taken, is to examine every orb closely. If the orb lacks depth and texture, you probably have a natural orb anomaly, such as moisture, dust or even an insect flying past your lens. 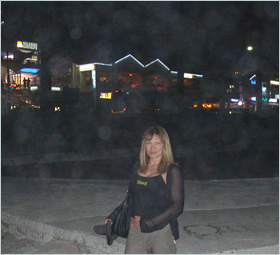 Photo of Lisa taken at Camps Bay in 2008. Notice the Orbs - these are fog orbs. 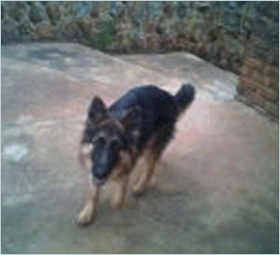 Chakra, Lisa's puppy Alsation two days before she passed over. Note the pink aura of love around her (Aug 2004 JHB). 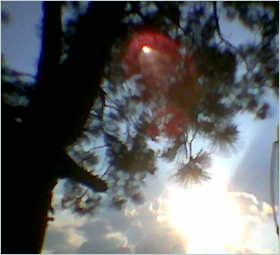 Photo taken with a phone after a funeral service of a dear and loving soul (Nov 2004). Note the energy image of a face in the trees, the crown has a definite glow of bright light in the red image of the face.

Little Emma who carries the aura of pure innocence and unconditional love. Her faith of that which has not yet been tarnished by society as it reflects her belief of "I will be taken care of and I am loved". Her inner spark reflects the purest of life energy outwards.

This website uses cookies to improve your experience while you navigate through the website. Out of these, the cookies that are categorized as necessary are stored on your browser as they are essential for the working of basic functionalities of the website. We also use third-party cookies that help us analyze and understand how you use this website. These cookies will be stored in your browser only with your consent. You also have the option to opt-out of these cookies. But opting out of some of these cookies may affect your browsing experience.
SAVE & ACCEPT